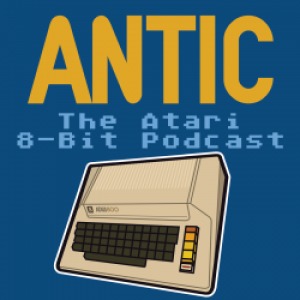 A collection of various documentation, movies and audio related to subjects covered on the ANTIC Podcast, primarily scanned or acquired by Kevin Savetz. Items in this collection may ultimately end up elsewhere in the Internet Archive's stacks.

On February 8 2018 I submitted a freedom of information act request with the Federal Bureau of Investigation for information about former Atari CEO Ray Kassar. They found no main file records about him.
Topics: Atari, FOIPA, Burlington Industries

Some photos I took at VCF Pacific Northwest 2018 pictures. Released under Creative Commons Attribution-NonCommercial. Give credit to Kevin Savetz. This does NOT necessarily mean you can use pictures of individuals without their permission.
Topics: Vintage Comptuer Festival, Living Computer Museum

Thomas Cherryhomes and PLATO In this episode of ANTIC The Atari 8-bit Computer Podcast:  In this first episode of 2018, we talk about the fact that ANTIC has been downloaded over ½ million times,  we get a surprise visit from Thomas Cherryhomes, who talks about PLATO for the Atari, we offer Atari 8-bit gift options for Valentine’s Day, Nir Dary tells us about some things he’s been exploring, plus all the Atari 8-bit news that we could find.   What We’ve Been Up To Laserdisc project -...
Topics: Atari podcast, Atari 8-bit, Atari 400, Atari 800, Atari 1200XL, Atari XE, Atari XL

Unboxing of Databar Optical Scanning Reader (OSCAR) Scans of the Commodore Databar magazine are forthcoming and will be linked here when they're online. The Atari and TI 99/4A versions of the magazines have already been scanned. Also the programs have been decoded and are available ready-to-use in the links below. My interviews with the creators of this products are forthcoming on ANTIC: The Atari 8-Bit Podcast. I'll put a link here once that's online. Databar Magazine - Atari edition...
Topics: Commodore 64, Commodore VIC-20, Commodore PET, Atari 8-bit, Atari 800, Databar, OSCAR, Optical...

On July 9, 2015 I filed a freedom of information act (FOIA) request with the FBI asking for all files relating to  Loyd Dorsett . Their response is attached. Short answer: the FBI found no relevant records. Here is the text of my request: This is a request under the Freedom of Information Act. I am requesting any and all files relating to Loyd G. Dorsett and the companies owned by Mr. Dorsett. Mr. Dorsett and his companies were primarily located in the state of Oklahoma. His companies include...
Topics: Loyd Dorsett, Dorsett Educational Systems, FBI, FOIA request, FOIA

The contents of a CD-ROM of freeware and shareware Atari ST software, published by the Seattle Puget-Sound Atari Computer Enthusiasts group. The CD is dated October 21, 2000. The CD-R that I have was showing its age and did not read perfectly. I was unable to make a .ISO image of it. But I was able to copy the vast majority of the files off of the CD and compress the collection into a .ZIP file. A few (6 to 7?) of the files just couldn't be read from the CD-ROM, but most of it is properly...
Topics: Atari ST, Atari 520 ST, Atari 1040ST, Atari SPACE user group, Seattle Puget-Sound Atari Computer...

A Quick Introduction to RAINMAN Plus (v1.2 - 8/4/95) The Remote Automated Information Manager, RAINMAN, is a set of tools and processes that allow information providers to create, modify and remove information stored on America Online. RAINMAN is easy to use. You create a script, or a text file of instructions, on your local computer system. Once you create the script, you send it to RAINMAN, which reads the script and performs the commands as instructed. The following is a brief introduction...
Topics: AOL, America Online, internal documents, RAINMAN Plus, RAINMAN

Extracted from the CD-ROMs  https://archive.org/details/The_Guinness_Encyclopedia_-_Wayzata_Technology_3221-1B_Disc_1_1995 and  https://archive.org/details/The_Guinness_Encyclopedia_-_Wayzata_Technology_3221-1B_Disc_2_1995 Using a script ( https://gist.github.com/tpwrules/4d44708ee4829ef60181 ) created by  https://twitter.com/tpw_rules "How is the information organized? This is a fresh approach to encyclopedic reference. A thematic organization, which allows for the entire story to be ...
Topic: Encyclopedia

Computer generated surface design and structural weave by Elaine M. Polvinen, 1989 Abstract "Computer Generated Structural Weave and Surface Design," the title itself is immensely broad and covers a very large area of study. The question asked at the beginning of this search was "What are the possibilities for textile design / fiber arts as far as the computer is concerned?" During the course of graduate school education, opportunities presented themselves to work on many...
Topics: Atari 8-bit, Macomber loom, Weavemaster, computerized loom, Apple IIe, DazzleDraw, thesis,...

Portions of two Dr. Demento shows which were recorded from the radio station KLSX (complete with commercials.) Both are incomplete episodes that I recorded using reel-to-reel tape when I was a kid. I've been unable figure out exactly when these aired, but I think circa 1987.
Topics: Doctor Demento, Dr. Demento, KLSX, 1987

Introduction to the Atari Computer. a Program Written in the Pilot Programming Language Designed to be an introduction to the Atari microcomputers for beginners, the interactive computer program listed in this document is written in the Pilot programing language. Instructions are given for entering and storing the program in the computer memory for use by students. (MES)
Topics: PILOT computer language, Atari 8-bit, Atari 800, Atari 400, Computer Assisted Instruction, Computer...

ANTIC Podcast Extras Collection
Introduction To BASIC Programming: A Student Workbook For The Atari
May 1, 1985 by Jon M. Lauritzen
texts

DESCRIPTION
A collection of various documentation, movies and audio related to subjects covered on the ANTIC Podcast, primarily scanned or acquired by Kevin Savetz. Items in this collection may ultimately end up elsewhere in the Internet Archive's stacks.
ACTIVITY